On November 3, 2012 I found another ‘Sailed Eider’ in Denmark. This is my third individual this year alone indicating that they are more regular than the number of records suggest. Whether they are true Northern 'borealis' Eiders or they represent intergrades between borealis and mollissima is yet undetermined. However, the characteristics of the Danish individuals are replicated within true borealis populations in the north Atlantic such as West Greenland, Northern Iceland (or are they hybrid populations?) and wintering Eiders at Svalbard.


Besides the white scapular sails several other characters indicate some degree of borealis influence, such as the head which had a high and steep forehead; the feathered white area on the side of the bill which was pointed and the black feathering below the frontal bill lobes which was very narrow; the frontal lobes on the forehead which were rather pointed and brightly coloured; and finally the white tertials which were very long and even obviously hanging down over the white rump patch.

According to the literature, the key features of adult male Northern Eider in relation to European Eider are:

However, one has to acknowledge that between borealis and mollissima there is a high degree of variation and overlap in these characters; thus most characters are not to be considered diagnostic, but only indicative. 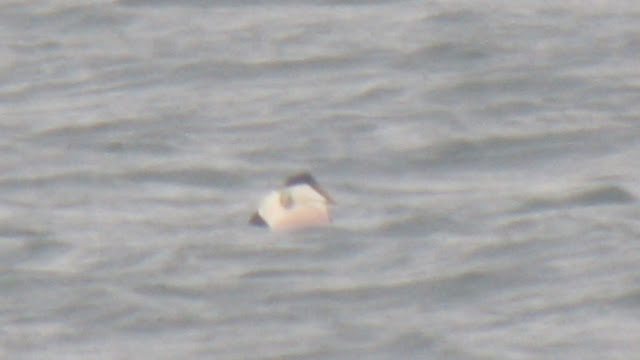